Twenty One Pilots have continued their Bandito Tour with a second leg, spanning North America. The tour started in Mexico, then went to Canada and will go across the United States. We attended the first show of the Canadian run, in Vancouver BC on May 12th at Rogers Arena.

Lines outside the venue started on Wednesday, May 8th, as many fans camped with the hope of being at the front. A large group in the front of the line handed out numbered wristbands as people arrived. 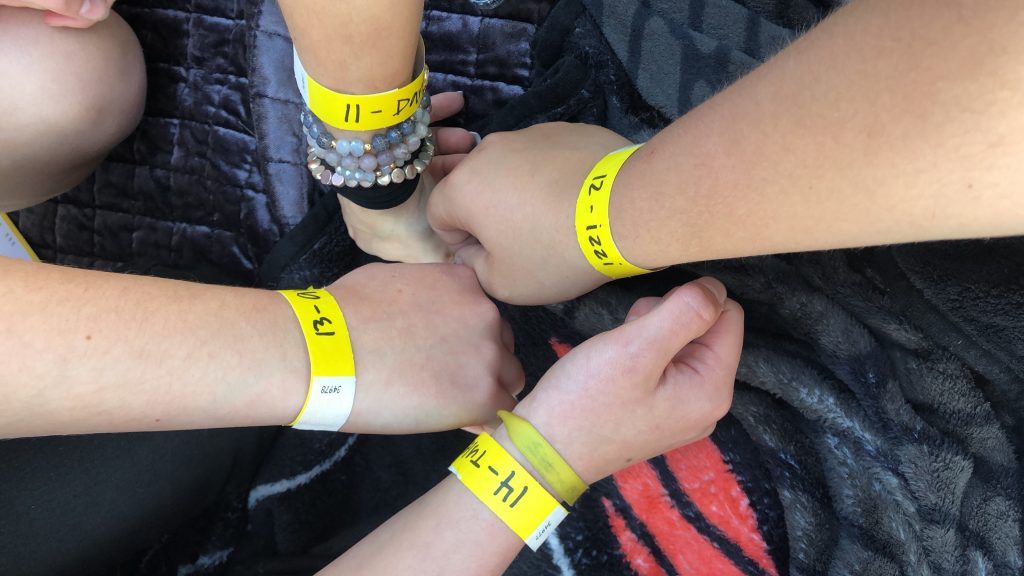 Lines became very long the morning of the show. If you want to be at the very front, we recommend trying to camp, otherwise it can be difficult to get in the first few rows.

When it came time to enter the venue, fans were walked in a line into the pit in groups of 100 and told if they ran they would be sent to the back of the line. This made everything much calmer and easier to experience.

Bear Hands opened up the show with energetic indie rock, getting the crowd moving and dancing. After their set was over, a large curtain was dropped over the stage. Ambient music played quietly ( you can listen to it here )

Slowly, the music and sounds grew louder and louder until finally the curtain fell. Fans screamed with excitement as the band’s drummer, Josh Dun, walked onto the stage carrying a lit torch. This is a good time to wear earplugs, as the crowd is very loud. As Dun begins to walk back to the drum set, we see the singer Tyler Joseph standing on a burning car. The intro to their song Jumpsuit begins to play, and the crowd immediately begins jumping. This is one of the most energetic songs of the entire show. There is a loud boom near the end of the song as well.

Quite a few songs into the show, during the song Lane Boy, Joseph instructs the crowd to “get down low” as everyone crouches on the ground. When the beat of the song drops, everyone rushes back to their feet, jumping and screaming as crew members wearing gas masks spray the crowd with cold gas. Prep yourself in advance for this moment, as it can be quite overwhelming if you aren’t aware of it. 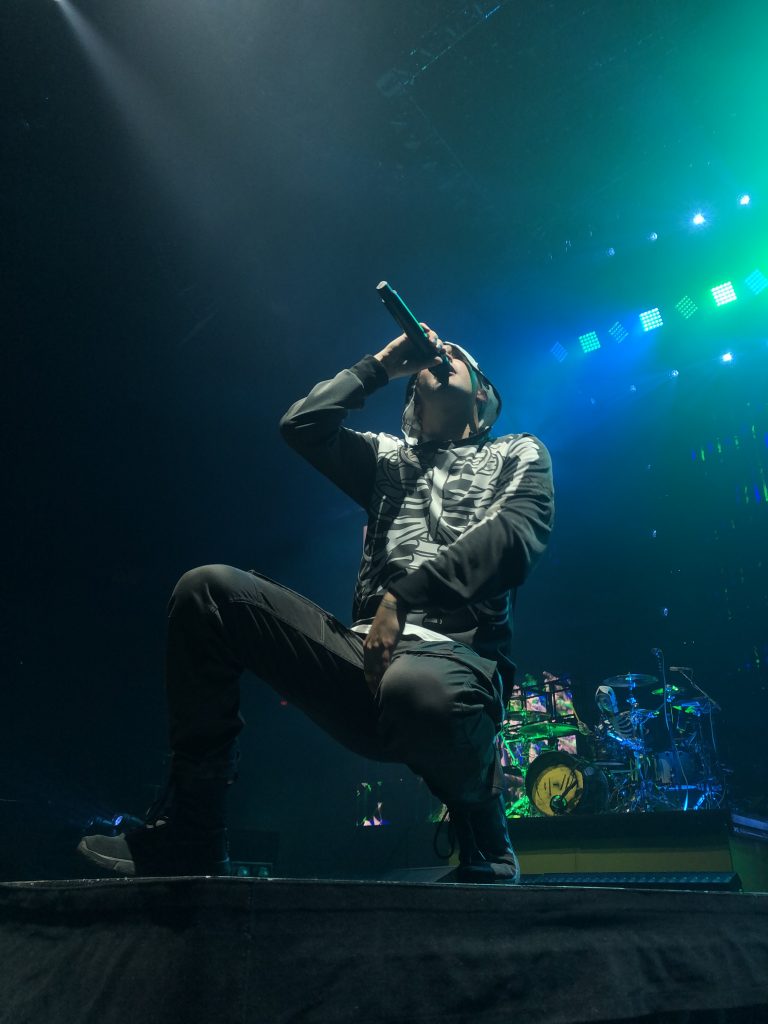 Directly after this song, Nico and the Niners begins. A bridge floats down from the ceiling as Joseph gets ready to cross over the crowd halfway through the song. As he prepares to get on the bridge, he gets very close to the pit, making the crowd push towards the front center. He then walks across the crowd the to “B-Stage” closer to the back. Many people in the pit turn around for this part, but we do not recommend it as someone could try to take your spot and it can be hard to get back to where you were.

The band does a couple songs at the B-Stage, then make their way back over the crowd during Pet Cheetah. As he gets back to the main stage, he says “All my friends in the pit, get your feet off the floor! Let’s jump, 1 2 3 go!” and the crowd does just that. During this song is around when those who aren’t first row get more impatient and push more, trying to reach the front. Be prepared for this and hold your ground.

Before the next song, Holding On To You, Joseph goes into the right side of the crowd as fans rush over to hold him up. You will be pushed quite a lot during this, as everyone is desperate to get closer to the singer. However, he only stays in the crowd for the first verse.

A few songs later, near the end of Morph, a “drum island” goes out into the crowd. It is a large thin platform with some elements of a drum set on it. This is placed on the center-left side of the crowd, and everyone somewhat close to it will push towards it. Dun then climbs on to play a small drum solo to finish off the song. 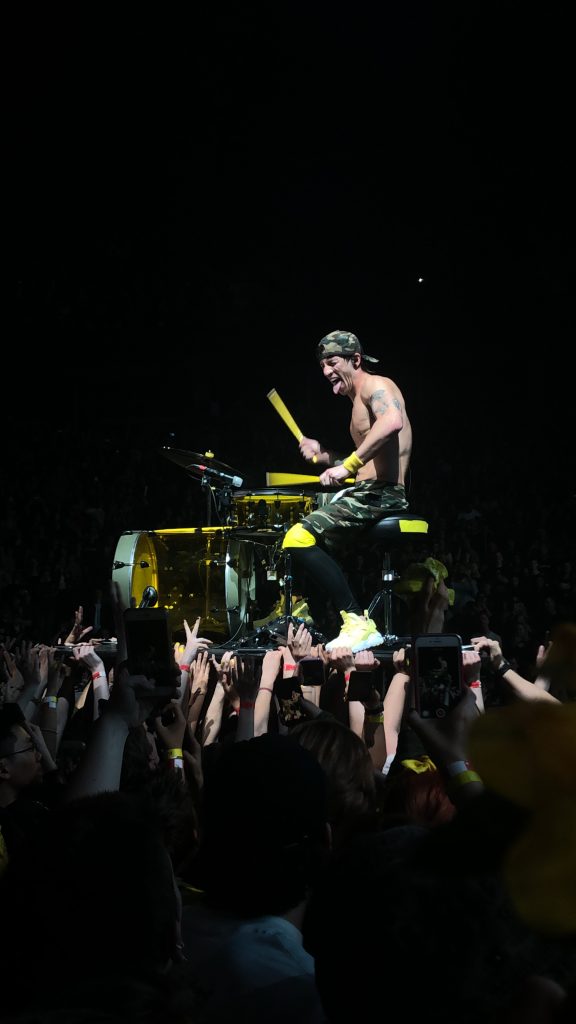 The next song, Car Radio, begins calm with Joseph at the piano, but as it progresses the choruses get more energetic and soon the crowd is jumping along with Joseph to every chorus.

The finale, Trees, is amazing but can be very overwhelming. Like Car Radio, it starts slow, but picks up to where everyone is jumping during the choruses. Then, during the end of the song, platforms and drums are placed on the crowd, one to the right and one to the left. Joseph and Dun board the right and left platforms, respectively. The crowd pushes towards these as well. They then pour their water bottles onto the drums and begin hitting them with mallets as green and yellow confetti and fog pour out from cannons.

After the song finishes, the two go back on the stage saying ‘We are Twenty One Pilots and so are you!” before exiting. Many fans then scoop up confetti from the ground before leaving the pit.

Getting out is somewhat slow, as usually some of the exits are closed. On the concourse, it will be crowded and loud, as well as filled with lines for merchandise. We recommend buying merchandise beforehand at the outside booth to avoid these long lines.

Overall, the band puts on an amazing show, but it is important to know these energetic moments beforehand so you can be prepared.